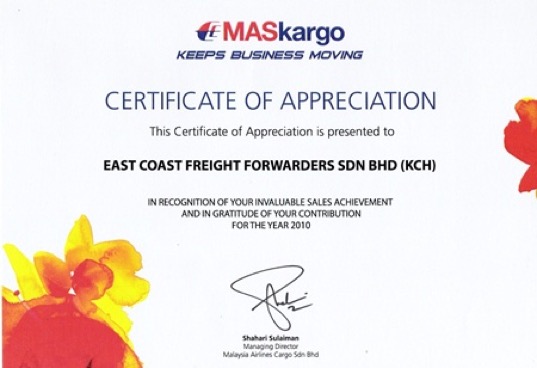 East Coast has been awarded the Mega Tonners Award 2010 by MASKargo.

The Award was received on behalf of the Company by its Air Freight Manager, Madam Jennie Goh at the MASkargo and Firefly Announcement Ceremony held at the Pacific Sutera Hotel Kota Kinabalu on 27th January 2011.

Dubbed the Oscars of the Air Freight Industry of the region, the MASKargo Mega Tonners Awards are the benchmark of Air Freight Excellence.

Mr. Michael Tan, East Coast’s Managing Director said, “ It is an honour for East Coast to be awarded the Mega Tonners Award once again. This award is a strong endorsement of East Coast’s capabilities in Air Freight. We are pleased to be recognized time and again as an industry leader in creating value and delivering superior services to both our customers and carrier partners in the region.”

“East Coast’s distinguished reputation is built on 30 years of investment, innovation and continuous improvement. We are proud of our resultant standing as an industry leader in East Malaysia.” said Mr. Tan, who also congratulated the Air Freight Team for another victory.